Anointing of the Sick

Illness can lead to anguish, self-absorption, sometimes even despair and revolt against God. It can also make a person more mature, helping him discern in his life what is not essential so that he can turn toward that which is. Very often illness provokes a search for God and a return to him - CCC 1501

Sacraments of Healing: Anointing of the Sick

When the Sacrament of Anointing of the Sick is given, the hoped-for effect is that, if it be God's will, the person be physically healed of illness. But even if there is no physical healing, the primary effect of the Sacrament is a spiritual healing by which the sick person receives the Holy Spirit's gift of peace and courage to deal with the difficulties that accompany serious illness or the frailty of old age.

In the Church's Sacrament of Anointing of the Sick, through the ministry of the priest, it is Jesus who touches the sick to heal. The core message of his healing tells us of his plan to conquer sin and death by his dying and rising.

The Sacrament of the Sick is administered normally in situations of the immediate prospect of surgery, for those who are significant of age, or those in danger of death. That said, the Rite of Anointing tells us there is no need to wait until a person is at the point of death to receive the Sacrament. A careful judgment about the serious nature of the illness is sufficient; in this way, it is appropriate for both children and adults.

Sacrament of the Sick in Scripture

The Sacrament of the Anointing of the Sick is first mentioned in passing in Mark 6:13. St James elaborates in his epistle:

Is any among you sick? Let him call for the presbyters of the Church, and let them pray over him, anointing him with oil in the name of the Lord; and the prayer of faith will save the sick man, and the Lord will raise him up; and if he has committed sins, he will be forgiven - James 5:14-15

Want to receive the Sacrament of Anointing of the Sick?

Sacraments of the Catholic Church 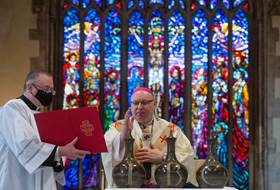 Anointing of the Sick

Sacraments of the Catholic Church

The Sacraments are sacred signs of divine origin, instituted by Jesus Christ, that reveal and communicate grace.
Continue Reading

Becoming Catholic is an amazing, life-changing journey. Much more than a series of educational classes, it moves through a process of deep reflection, discernment and formation.
Continue Reading

Prayer lies at the very heart of the life of the Church and is the foundation of Christian discipleship.
Continue Reading

'All scripture is inspired by God and is useful for teaching, for reproof, for correction, and for training in righteousness, so that everyone who belongs to God may be proficient, equipped for every good work.' (2 Timothy 3:16-17)
Continue Reading

'Believing is possible only by grace and the interior helps of the Holy Spirit.' (CCC 154).
Continue Reading

The disciple of Christ must not only keep the faith and live on it, but also profess it, confidently bear witness to it, and spread it (CCC 1816).
Continue Reading

During the pandemic, many Catholics have remained engaged with their faith through live-streaming and spiritual communion. Parishes have also embraced the digital world in a variety of new ways. Many, however, have experienced 'homesickness', a longing for the Eucharist and community. Whether you have been away for a while or are interested in seeing what we are about, perhaps for the very first time, COME HOME!
Continue Reading

The Ordo offers a liturgical guide to the solemnities and feasts of the Roman Catholic Church. In addition, it highlights world days of prayer and themes of intercession, which are shaped within the five main liturgical Church seasons.
Continue Reading

The Feast of the Epiphany: House Blessing

In various parts of the world, the Epiphany is marked with the time-honoured tradition of “chalking the doors.” The formula for the ritual is simple: take chalk of any colour (ideally blessed by a priest on the Feast of the Epiphany) and write above the entrance of your home: 20 + C + M + B + 22
Continue Reading