The Diocesan Crest was originally created under Archbishop Peter Smith and designed to represent the Diocese of Southwark, based on heraldic principles 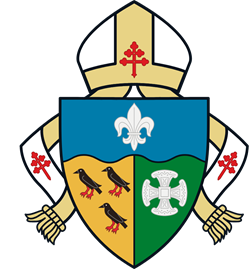 Above the shield is a Mitre, the liturgical hat worn by a bishop.  On the front of the mitre and on the two lappets, which hang from the back of the mitre, are three metropolitan crosses, which indicate that Southwark is a Metropolitan Archdiocese. The crest has recently been updated under Archbishop John Wilson to closely indicate the gold embroidery on the auriphrygiata mitre worn when presiding at the celebration of Sacraments.

The shield is divided into three parts, based on the three patrons of Southwark:

The upper part of the shield is a silver Fleur de Lys on a blue background: both elements are traditionally associated with the Blessed Virgin Mary.

In the bottom right corner of the crest is an Augustine Cross, a style that is associated with Canterbury, dating back as far as 850 AD.  Augustine came to the shores of the Isle of Thanet in 597 AD, having been commissioned by Pope St Gregory the Great to convert the English. He is known as the Apostle to England and was the first Archbishop of Canterbury.

St Thomas was famously assassinated by King Henry II’s men in 1170 whilst in Canterbury Cathedral for asserting the rights of the Church. The bottom left quarter of the Diocesan Crest shows three Cornish Choughs, as seen on the crest of St Thomas of Canterbury. In heraldry, choughs are known as "beckits”.

Geographical significance is related through the colours on the shield of the Diocesan Crest.

This colour alludes to Southwark’s Marian connection, Baptismal water and the waters that form a major part of the boundaries of the Diocese, such as the River Thames and Kent coast are also represented by blue.  In addition, the line dividing the upper and lower parts of the shield is wavy to represent flowing water.

Green represents Kent, the Garden of England, in the right lower quarter of the shield.

Yellow represents the area of London on the left quarter of the shield.

Collectively these colours represent the values of Trust, Growth and Illumination. 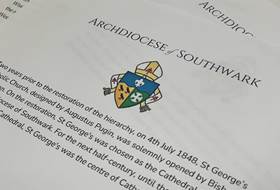