Read about two of our seminarians who will continue their training and formation for the priesthood at Allen Hall in the Autumn of 2021. 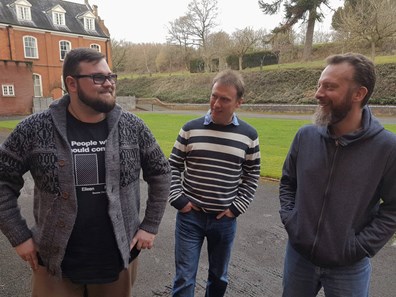 My journey to the seminary began in my home parish of St. Theresa’s, Biggin Hill, when our elderly and kindly parish priest encouraged me to become an altar server after first Holy Communion. Fr. Flood was a great nurturer of priestly vocations and when I was 12 years he old took me on a “Discovering the Priesthood Day” for young people at the seminary at Wonersh.  I could never have known on my first visit that 12 years later I would end up as a student in this very seminary.

I thought about the Priesthood throughout my time at secondary school and enjoyed taking part in parish life, but always made time for my friends and other activities. After completing my secondary education, I was given the chance to have an experience in Spain with a Spanish Religious Community which had connections to my home parish. I found myself at 18 years old living in an exciting new country, learning a new language and working alongside the Friars in a number of difficult neighbourhoods.  My time in Spain certainly made an impression on me, to this day I still love a good Paella, but I felt more inclined towards working as a parish priest rather than being a Religious Brother, and I wasn’t ready for in depth study at that point in my life. After returning from Spain I worked in a parish as a pastoral assistant, this gave me a greater insight into the inner workings of the Parish Priest.

By the time I had reached my early 20s I was pretty sure that God was calling me to the Priesthood, however, I felt and was advised that as a young man I should have some experience of the “real world”, and being somebody that has always loved travelling and hustle and bustle I applied for a job for Easyjet, working at Gatwick airport as a Customer Service Agent. This job certainly broadened my horizons and not only allowed me to do a bit of personal travel but also gave me the opportunity to meet all kinds of people and to see their good sides…and on many occasions their bad ones! After a period at Easyjet, I moved over to British Airways in the same roll. It was whilst working at Gatwick that through another Priest I was introduced to the new Southwark Vocations Director Fr. John, who over a period of time got to know me, and helped me reach the decision that it was right for me to apply for the Diocesan Priesthood.

I am very much enjoying being part of the seminary community, just like “the real world”, the seminary is a place where we are called to serve God to the best of our ability, with all the joys and challenges that brings. It is great to be living with likeminded guys who help and support me on my journey to the Priesthood. What greatly encourages me is to know that many people are praying for me and for my brother seminarians. I would encourage anyone that feels they may be called to the Priesthood to pray about it and when the time is right, to speak with one of our Diocesan Vocations promoters who will be very helpful in guiding them through their discernment.

I grew up in Sittingbourne, Kent, in a non-practicing Christian family. I asked to be baptised when I was 10 years old. The reason at this stage was maybe not the purest; a majority of people in my class at school were baptised and I was one of a few who were not. I wondered what I was missing out on and asked if I could get baptised. It meant something to me, but I did not fully understand what it meant to be a baptised Christian and I did not become part of any particular church. One night, aged 14, I read the story of C.S Lewis’ conversion to Christianity and it had a profound impact upon me. It was then that I started to pray, accepting the gift of my baptism and Christ’s offer of friendship.

I went on to study Theology at Heythrop College in London and was received into the Roman Catholic Church (from Anglicanism) at the end of the degree, aged 21. The two issues that motivated me to convert were unity and the Eucharist. A saint who particularly witnessed to me an authentic Christian spirituality and a love for Christ’s real presence in the Eucharist, was St Damien of Molokai, a book on whom (by John Farrow) I randomly found in a library and which I couldn’t stop reading once started. I then started what would be a six-year career teaching Religion and Philosophy in Catholic schools.

I can certainly say that my life was changed by the recognition that I am a child of God and we are all called to sainthood. The best way I can explain as to how it was that I came to consider priesthood as my vocation and part of God’s will for my life, is by saying it was an ‘itch’ that would not go away. My mind would constantly move to the idea, particularly in adoration before the Blessed Sacrament. Others, particularly nuns, would mention it to me (usually at the points when I thought I had decided it was not my vocation), and I came to realise that I felt most alive when active within my parish community and that Priesthood was a vocation I needed to pray about seriously. By God’s good grace, I was put into contact with the vocation’s director for the Archdiocese of Southwark and found myself starting seminary in 2019 at St John’s, Wonersh. In 2021 I moved to Allen Hall Seminary, London, where I continue my studies and formation. Please pray for me and all in seminary formation, that we may become Christ’s priests

Speak to the Vocations Team

The Evangelist magazine was originally printed on an annual basis and distributed to parishes, but the Covid-19 pandemic has heralded a change in format, and the seminarians now contribute to an online blog, where they publish homilies from senior clergy, prayer guides and spiritual book reviews.

Watch the video below about The Evangelist:

Is God Calling Me

Sr Anouska is the chaplain at Goldsmiths, University of London and London South Bank University. Read more about her vocation as an apostolic religious sister.
Continue Reading

The Fourth Sunday of Easter we traditionally celebrate as Good Shepherd Sunday and Vocations Sunday. This is because in the Gospel of the day (from St. John’s Gospel), Jesus speaks of himself as the Shepherd who is prepared to lay down his life for his sheep.
Continue Reading