The Feast of St George normally takes place each year on 23rd April, However, in 2022 the Feast was transferred owing to the fact it fell within the Easter Octave.

Archbishop John Wilson, the Cathedral Clergy, Chapter of Canons, and St George's Cathedral congregation gathered to celebrate St George's Day in order to honour the Patron Saint of the Cathedral, and of England, and to venerate the relic of St George on the evening of Tuesday 26th April 2022.

Homily on the Feast of St George 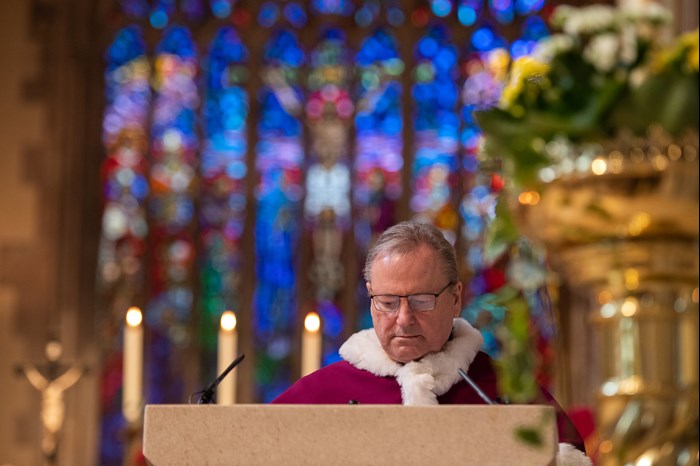 It is hard for us to grasp the reality of the violence of war. The lives of ordinary men and women are disrupted, the security of their comfortable way of life is radically disturbed. Homes are demolished, businesses, destroyed, medical and social organisations suspended. Men women and children are endangered their lives threatened and families broken. The ordinary events of day-to-day living are dismantled, and life is reduced to simple survival. Whole cities and towns are reduced by bombing and vast numbers are reduced to the life of homeless refugees. Once proud communities are reduced to rubble.

We know at first hand the consequence of war when our own cathedral church of St George was bombed during the last war. Within our diocese families had to experience the full consequences of the violence of war. It is a sad commentary that in the present conflict between Russia and Ukraine two elements within the waring factors look to St George as their patron, namely England and Moscow. In our search for peace, we can rightly turn to St George for his intercession. St George is venerated throughout Christianity as a saint. He is particularly venerated in the eastern church. According to tradition he was a Roman soldier, a member of the Praetorium Guard, who was martyred during the reign of Diocletian. He refused to recant his Christian faith and was martyred in 303AD. George became one of the most venerated saints in Christianity and has been especially venerated as a military saint since the crusades. Pope Gelasius when canonising him named him as one whose names are justly reverenced among men but whose acts are known only to God.

Though we know little of the life of St George, what we do know places him among the saints. His popularity as a saint witnesses to his strength and faithfulness to God. As with all saints George is offered to us as a model that we can follow in our own lives. His strength and courage is an ample witness to his holiness and fortitude. We witness each day the trauma of war as we watch the reports of the news media from the various conflict areas in Ukraine. We rightly turn to St George in times when we need his intercession to help us face the reality of the violent situation we are facing at the present day.

The author of the Apocalypse acknowledges the power of God and his victory over evil. “Victory and Power and Empire forever have been won by our God, and all authority for his Christ”. Those who follow in his way even to death will share in his resurrection, “ “They have triumphed over him by the blood of the lamb and by the witness of their martyrdom.” Jesus in the Gospel shares with the apostles the cost of discipleship. Pope Francis in his Easter Day homily stresses the identification of Jesus with his disciples. Only Christ, he tells us, can bring peace as he bears our wounds inflicted by our fratricidal hatred which is war. He said the wounds on the body of the risen Jesus are the signs of the battle he fought and won, won with the weapons of love so that we might have peace and remain in peace.

In celebrating the Feast of St George we seek the intercession of St George in our desire for peace. We have confidence that he will look kindly on our need and support above all the mothers and children isolated by the destruction of their homes.

given at St George's Cathedral

Photographs of Celebrations for the Feast of St George 2022

With grateful thanks to Marcin Mazur 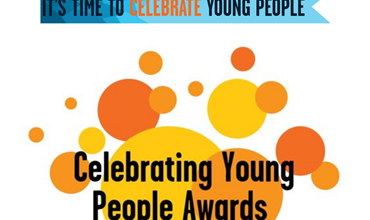 Million Minutes, the catholic charity that specifically supports and celebrates the achievements of remarkable young people, is seeking your nominations for its 2022 Awards. Continue reading 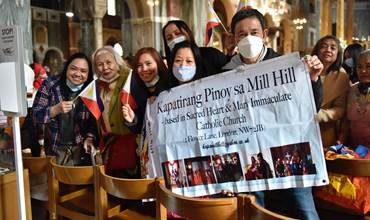 The annual Mass for Migrants on the Feast of St Joseph the Worker, celebrating the significant contribution made by migrants to the life of the Dioceses of Brentwood, Southwark and Westminster, took place in Westminster Cathedral on Bank holiday Monday 2nd May 2022. Continue reading