Five days before the UN climate conference, COP26, in Glasgow, and four days before the G20 Summit in Rome, 72 faith institutions, of which 37 are from the UK, including the Archdiocese of Southwark, have announced their divestment from fossil fuels in the largest-ever joint divestment announcement by religious organisations. 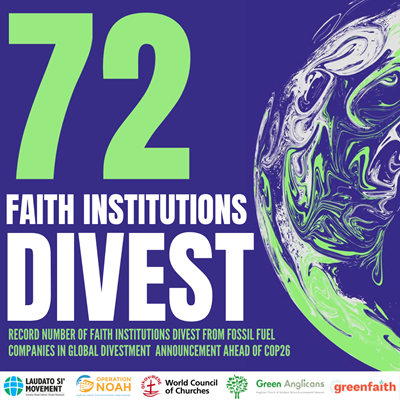 In addition to Southwark's participation, other institutions include the Catholic Bishops’ Conference of Scotland, 15 Catholic dioceses in the UK and Ireland, including the Archdioceses of Glasgow, St Andrews & Edinburgh, Birmingham, as well as the Church of England Dioceses of Truro and Sodor & Man; and the Buddhist religious movement Soka Gakkai International – UK. The UK Churches and dioceses involved in this announcement represent nearly 2,000 local churches.

It follows the recent call from Pope Francis and other faith leaders to global governments to address the ‘unprecedented ecological crisis’ ahead of COP26. Today’s announcement shows an increasing number of Catholic institutions are responding to the recent Vatican recommendation to divest from fossil fuel companies and invest in climate solutions.

God made the world and all that is in it. The world reflects God and therefore is beautiful and to be valued. Furthermore, the whole creation shares in the renewal flowing from the Lord’s Paschal Mystery, though it still awaits full liberation from corruption (cf. Rom 8:21) and the ‘new heavens and the new earth’ (Rev 21:1).

This is reflected in Pope Francis’ encyclical Laudato Sì, calling for Christians to an ‘ecological conversion, whereby the effects of their encounter with Jesus Christ become evident in their relationship with the world around them’ (§ 217).

This implies respect and care for all of humanity and all creatures and aspects of the environment. Our actions have implications for other people and for the world that has been entrusted to us. Our behaviour, therefore, needs to be tempered to minimise adverse effects, even when that implies a change in our lifestyles.

The Archdiocese of Southwark has, for some years, been committed to an ethical investment policy, including divestment from fossil fuels.  This is one of a range of diocesan commitments to the environment, which also include:

The International Energy Agency (IEA) stated in its recent Net Zero by 2050 Roadmap that there can be no new coal, oil and gas developments if the world is to limit global warming to below 1.5°C and prevent catastrophic climate impacts. Fortunately, the growth of the fossil fuel divestment movement has been unprecedented in recent years. According to a new report, more than 1,485 institutions with combined assets of over $39 trillion have made some form of divestment commitment. This figure has risen from a starting point of $50 billion in 2014, with faith institutions at the forefront of the global divestment movement.

‘As the UK prepares to host COP26, we are delighted that 37 UK faith institutions have decided to divest from fossil fuel companies and join this record global divestment announcement. We call on the UK and global governments to end fossil fuel subsidies and bring an immediate halt to new oil and gas exploration, including the Cambo oil field.’

A full list of the 72 institutions divesting from fossil fuels and quotes from leaders can be found here.

The Catholic Bishops’ Conference of England and Wales has announced that seventeen buildings listed Grade I or II, in the care of the Catholic Church in England, are to receive grants through the government’s £1.57 billion Culture Recovery Fund. Continue reading
Next Article