Monsignor John Mbinda C.S.Sp, who until very recently served at the parish of St Chad's, South Norwood, has been appointed Bishop-Elect of the Diocese of Lodwar in Kenya. 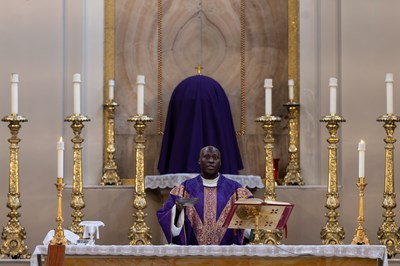 Monsignor Mbinda has most recently served as an assistant priest at Our Lady of Grace and St Edward Chiswick. Prior to that he served at the Spiritan Church of St Chad's RC Church in South Norwood, where Bishop Pat Lynch also previously served before becoming Auxiliary Bishop of the South-East area in Southwark.
Arriving on sabbatical from Kenya in 2021, Monsignor John Mbinda began life in the UK at Sacred Heart Parish in Camberwell, under the care of its parish priest, Fr Victor Darlington.
Mgr Mbinda expressed joy at his appointment, saying that he was honoured and that he was 'looking forward to returning to Kenya in faith and friendship'.
Listen to the Bishop-elect speak in the short podcast below (courtesy of the Catholic Bishops' Conference of England and Wales) about his new appointment and also about the Church in Kenya.

Monsignor John Mbinda, C.S.Sp., was born on 5 May 1973 in Machakos, in the Diocese of the same name. After attending the Pope Paul VI Junior Seminary in the Diocese of Machakos (1989-1992), he entered the Congregation of the Holy Spirit, the Spiritans, making his perpetual vows on 12 October 2001.

He studied Philosophy (1993-1996) at the Spiritan Missionary Seminary in Tanzania and Theology at Tangaza University College in Nairobi (1997-2002).

Ordained a priest on 18 May 2002, he subsequently held the following positions:

Parish Vicar of the Tangulbei Catholic Mission (2002-2004) and Parish Priest of the Kositei Catholic Mission in the Diocese of Nakuru (2004-2008); Master’s Degree in Development Studies from the Kimmage Development Studies Centre, Ireland (2008-2010); Parish Priest of St. Austin’s Parish in the Metropolitan Archdiocese of Nairobi and Head of the Development Office of his Congregation (2010-2015); Provincial Superior of the Congregation of the Holy Spirit in Kenya and South Sudan (2015-2021).

Since August 2021 he has so far spent a sabbatical in the Archdiocese of Southwark, England, and has been Parish Assistant in St. Chad’s Parish, South Norwood, entrusted to the Spirit Fathers.

In addition, he was Professor at Tangaza University College (2014-2017); President of the Union of the Circumscriptions of the Congregation of the Holy Ghost in East Africa – UCEAF (2015-2016) and Consultor for the Metropolitan Archdiocese of Nairobi (2016-2020).

Monsignor Mbinda was serving as Assistant Priest at Our Lady of Grace and St Edward in Chiswick, west London before the Episcopal appointment.

Holy Week commences on Palm Sunday, when Jesus rides into Jerusalem on a donkey, lauded by the people. However, the mood changes, and the same people are asking for his crucifixion only days later. Continue reading 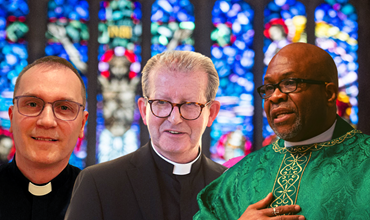 Three new appointments in the Archdiocese of Southwark

On Friday 8th April the Archbishop was delighted to announce three new key appointments for the Archdiocese of Southwark. Continue reading