The truth and power of Christ’s dying and rising, of his cross and crucifixion,

is the defeat of sin and death... and our rescue from the grave. 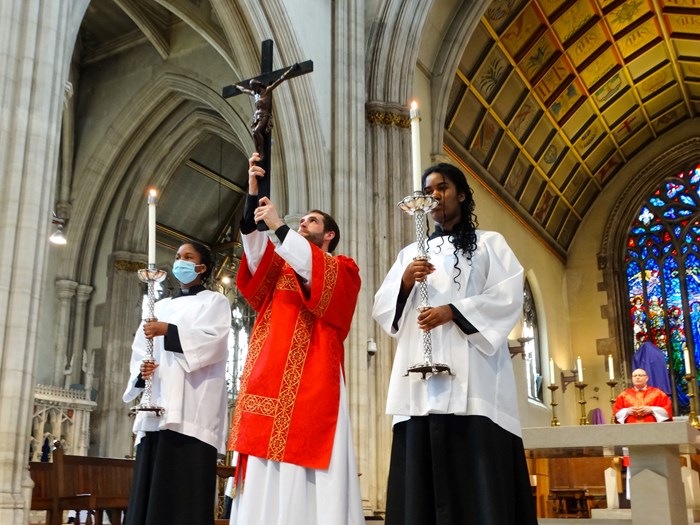 View all photographs of the Solemn Liturgy of the Passion

Dear brothers and sisters in Christ

A few years ago I read a book called The Choice by Edith Eger.[i] It tells the harrowing true story of her family’s imprisonment in the concentration camp at Auschwitz. Edith and her sister survived and went on to build a new life. However, it was her description of their liberation that struck me in such a powerful way.

Towards the end of the war, Edith recounts how the guards at Auschwitz became especially vindictive. Among many brutal acts, they would offer food to those dying of starvation. As those utterly desperate from hunger summoned the strength to reach out, the guards quickly snatched away the food for their perverse amusement.

Both Edith and her sister Magda were starving to death. A guard gave Magda a tin of sardines, part of a Red Cross parcel, but without means of opening it. ‘It’s just a new flavour of cruelty,’ wrote Edith, ‘an unopenable can of fish is the most human part of her now. We are the dead and the near dead. I can’t tell which I am.’[ii]

On the verge of death, their bodies were piled with those who had already passed away. Edith describes hearing the voices of American soldiers who had entered the camp. ‘Raise your hand if you are alive,’ shouted one of them.[iii] But neither Edith nor Magda had the strength to move or cry out. Then, suddenly, Edith saw a beam of bright light. It attracted the soldiers’ attention and they came across to find her and her sister still alive. The light was the sun catching the shiny tin of sardines clutched in Magda’s hand. What had been the instrument of their torture, became the means of their rescue.

When I read this, as a Christian, it brought me, humbly, to the cross. The instrument of our Lord’s torturous death was, at the same time, the means of our rescue. The truth and power of Christ’s dying and rising, of his cross and crucifixion, is the defeat of sin and death; the defeat of the ultimate destruction of our sin and death, yours and mine, and our rescue from the grave.

St Paul tells us that ‘Christ died for our sins in accordance with the Scriptures.’ (1 Cor 15:3) We see this in Isaiah, where the passion and death of the Lord Jesus fulfils the ancient prophecy about the suffering servant. The crowds were appalled to see him looking so disfigured. The suffering servant was hated and abandoned, an anguished man of sorrows.

This is the Lord Jesus, the Good Shepherd, now led to slaughter like an innocent lamb. It was our suffering, our faults, our sins, that he carried. Supremely, on the cross, our Saviour’s pierced heart reveals not just a heart of pain. It reveals the heart of the tremendous lover. ‘In the pierced heart of the Crucified,’ wrote the future Pope Benedict XVI, ‘God’s own heart is opened up; here we see who God is and what he is like.’[iv]

God is with us in our suffering. God knows what suffering means ‘from the inside,’ from his heart to our heart. In sickness and death; in the brutality of war, seen so terribly in Ukraine and around our world; in torture, violence, and injustice; all our most profoundly sorrowful experiences intersect with the pierced and broken heart of God’s crucified son.

In the midst of so much we cannot understand; faced with questions for which there seem to be no easy answers, we turn in faith to God. And we find God, in his son, present with us and to us through it all.

‘As far as I know,’ wrote Cardinal Basil Hume, ‘no one has adequately and conclusively answered the existence of evil in our world.’   He continued,  ‘I do know, however, that the answer is to be found in looking at the crucified Christ…Slowly, we see, and then only dimly, that in suffering of all kinds there is new life to be found, and therefore hope. It would not have been so if Christ had not risen from the dead.’[v]

Dear friends, if we have suffering in our hearts, for ourselves or for those we know and love, let us bring it to the pierced heart of the Lord Jesus on the cross. 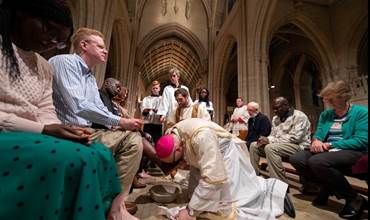