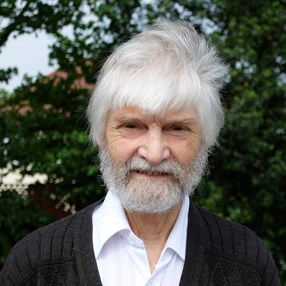 Amongst the many tributes that have been made to Deacon Michael, the members of our diocesan Christian Unity Commission wanted to give our own appreciation of his outstanding work over many years, for the Commission and for the work of Christian Unity generally.

Our recollection goes back to the late 1990s, when he and the late Deacon Braz Menezes were already active in supporting Unity work in and around their parish of Blackfen. Michael was a great practical ecumenist, always looking to bring people together socially and for prayer and charitable work. He became a ‘Unity Contact’ for his parish and regularly attended diocesan and SE Area meetings of the Commission. He went on to become Secretary for the SE Area group and later its Chairman, all the time looking to build up contacts from as many parishes as possible. He would also give feedback on ecumenical activities, in reporting to the Deanery Pastoral Council, taking every opportunity to ‘spread the word’.

One particular achievement was as a prime mover in promoting the very popular annual procession at the site of Lesnes Abbey, near Abbey Wood. There cannot be many places where a Blessed Sacrament Procession is a well-supported ecumenical event. Presumably in its origins, early last century, this was not so. That it is so today, is surely in a significant measure thanks to Michael’s own faith and ecumenical openness, always emphasising what we have in common, with Christ at the centre.

Michael will probably be remembered most widely for his work as Editor of Together in Christ, the Commission’s journal. This has always had a remarkably widespread ecumenical circulation, including beyond the geographical area of the diocese. It started in 1983 under the editorship of Una Ratcliff, whom Michael succeeded in 2003. He was always very conscientious and thorough, always on the lookout for possible articles and writers — and yet always patient and never ‘pushy’. He also had the massive job of mailing out each edition to readers, in some cases delivering them personally or through various contacts. In 2020, with the arrival of the pandemic, it was regretfully decided to stop producing the printed version, relying instead on the online version, which Michael had already been developing.

While confined to home during the initial lockdown, Michael saw something else he could do for the Commission. He wanted there to be an online archive of Together in Christ, so that anyone could have access to the range of articles, reflecting the progress of ecumenism over the years. He appealed for the few copies he lacked in his collection. He didn’t quite find them all, but he painstakingly scanned in all the old issues he had, which hadn’t been typed on a computer. It was almost as though he felt his time was limited and he wanted to achieve this goal before it was too late. The archive is accessible at http://christianunity.rcaos.org.uk/together-in-christ-archive/

Those of us who knew Michael became aware of health problems, which developed over many years.  In addition to his many duties as a deacon, he was a carpet and flooring fitter.  Spending so much time on his knees, breathing in fumes from glues took its toll on him — but Michael never complained and humbly accepted his lot.  We all remember him as a person who was courteous, helpful and approachable, taking everything calmly in his stride. He was a lovely, down-to-earth, gentle man with a great love for his Lord and his fellow Christians. May he rest in peace and rise in glory.

The Archdiocese of Southwark is blessed with many commissions carrying out a variety of work, from Education to Ecumenism and Safeguarding to Spirituality. They all play an active role in the life of our Catholic community.

Agency for Evangelisation and Catechesis

The Christian Unity Commission for the Roman Catholic Archdiocese of Southwark has been in existence for over forty years. Our main task is to encourage Catholics within the Archdiocese to work and pray for Christian unity.
Continue Reading

Do you share our vision of a world in which people live in peace and harmony with one another and with nature, where our common humanity is respected and all can contribute freely to the common good?
Continue Reading

The diocesan Liturgy Commission has a responsibility to the Archbishop for the promotion of the liturgy and other acts of public worship. Its work encompasses the buildings in which we worship, the music with which we praise God and training for those involved in the liturgy in different ways.
Continue Reading

The Southwark Marriage and Family Life (MFL) team is responsible for initiating, fostering and supporting activities in the diocese that will enable married couples more fully to live out their sacrament of matrimony by enriching their relationships.
Continue Reading

Although it has not been possible to undertake any pilgrimages until very recently, due to the COVID-19 Pandemic, it is ordinarily a regular part of Catholic life. The Christian life is a journey towards God, and in this simple act of outward physical travel, whether on foot or by aeroplane, we inwardly seek to draw closer to Christ by putting time aside to consider our relationship with the Lord, and ask where he is leading us.
Continue Reading

Welcome to Safeguarding within the Archdiocese of Southwark.
Continue Reading